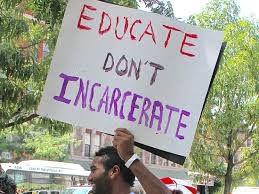 People of color, particularly Native American, black, and Latino people, have felt the impact of discrimination within the criminal justice system. Many immigrants experience mandatory detention, racial profiling, and due process violations because of laws and policies that violate their human rights—and the principles of equal justice, fair treatment, and proportionality under our criminal justice system. The good news is that we as a nation are at a unique moment in which there is strong public, bipartisan support for criminal justice reform. Prison reform is the attempt to improve conditions inside prisons, improve the effectiveness of a penal system, or implement alternatives to incarceration. It also focuses on ensuring the reinstatement of those whose lives are impacted by crimes.

How can we help prison reform?

Get Involved in Criminal Justice Reform

Advocacy is a means of influencing your community and elected  officials to embrace issues you care about. With over two million  Americans incarcerated and an ever growing number of people being  released back to our communities, advocating for the reform of the  criminal justice system is more important than ever. When you  advocate for criminal justice reform, be sure you have a compelling  argument, facts to back it, relatable background, and a human  connection. Prisoner advocates listen to the needs of inmates and their  families and work with officials and politicians to resolve practical and  legislative problems in prison systems. Advocates might promote  education and rehabilitation programs for inmates, lobby ​f​or prison  reform and provide inmates with information and resources. This  position also might include studying past and current issues to develop  prisoner rights defense strategies. This job can be stressful, especially  since there might be more work than an advocate can realistically  handle. Prisoner advocates need excellent oral and written  communication skills, along with empathy and problem-solving abilities. Volunteers can receive in-depth experience working with  inmates and their families. Aspiring advocates might visit prisons,  participate in fundraising, interview and correspond with prisoners and  provide information to the public.

Overall, Prisons in America are flawed in many ways. One flaw that  plagues our system of punishment is racial bias...Our prison system has  many problems and is in desperate need of reform. Some of these problems include inhumane living conditions, racial bias, and increased  risk of reincarceration.

How can we change a system set up to control Black people? By radically dismantling it.

Why Prison Reform Matters in America

Re-Entry back into Society

A just society requires that those who commit crimes stand punishment for their deeds before being allowed to reenter society. Yet, the punishment often doesn’t fit the crime, and even when it does, many are denied the tools to effectively become productive citizens after they’ve paid their debts. It has increasingly become the case in the United States that roadblocks to redemption are created by the very system that seeks to rehabilitate.